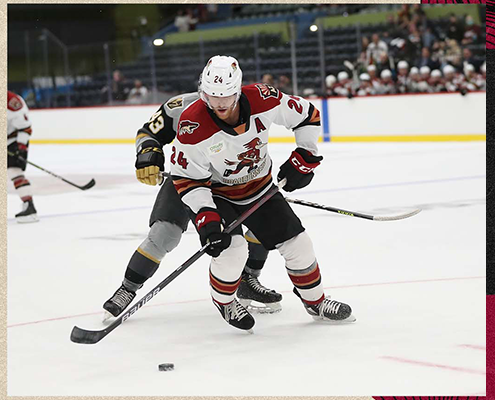 Tucson, Arizona – The Tucson Roadrunners began their three-game preseason slate with the Henderson Silver Knights Wednesday night at the Tucson Arena. The Roadrunners fell to the Silver Knights 5-1, but promising showings from young prospects shone through.

The Roadrunners came out of the gate strong, winning the opening face-off and applying immediate pressure in the Henderson zone. Trouble arose when the Roadrunners couldn’t clear the puck from their defensive zone, and Pavel Dorofeyev capitalized with his first of two goals in the period. Veteran forward Hudson Fasching drew a roughing penalty on Derrick Pouliot shortly after but went to the box for a penalty of his own soon after, negating the power-play. Henderson scored three goals in under three minutes to close out the first period, making the score after the opening frame 4-0 in their favor. Tucson limited the damage in the second period, allowing a single Henderson goal midway through the second period, pushing their lead to 5-0. Tucson was able to get on the board early in the third period, when Quinn Wichers buried a pass from Travis Barron to prevent the shutout. The Roadrunners kept the Silver Knights scoreless for the final 28:48 of the game, winning the third period and tightening up their defensive game. Goaltender David Tendeck made his long-awaited Roadrunners debut, making 28 saves throughout the contest.

The Roadrunners head out on the road this weekend to face this same Henderson Silver Knights squad, in a pair of games Sunday, October 10, and Monday, October 11 at the Orleans Arena in Las Vegas. Coverage for those games starts at 6:45 on Fox Sports 1450AM, where “Voice of the Roadrunners” Adrian Denny will bring you all the action live from Las Vegas.

“I’ve been around for a while, I know the coaching staff, I know what they expect. I want to be a leader on the team, and lead by example. I’m not the most vocal guy, but doing the little things, showing the young guys the right way to play on and off the ice. As far as myself, I think I’ve made strides every year and I’m looking to keep improving.”

Tucson Roadrunners defenseman Cam Dineen on returning to Tucson for his fourth season with the organization, and the role he serves on the roster.

TENDECK TAKES THE ICE – Tucson Roadrunners goaltender David Tendeck made his first in-game appearance with the team Wednesday night against the Henderson Silver Knights. Tendeck suited up as the team’s backup goaltender for a handful of games, including during last April’s trip to Las Vegas to face the Silver Knights on their home ice. Tendeck never saw game action for the Roadrunners but won eleven games for the Rapid City Rush last season.

Tucson Roadrunners forward Blake Speers skates up the ice wearing the “A” in Wednesday night’s preseason tilt with the Henderson Silver Knights. Speers missed the majority of last season due to injury, but will look to be back in full force with Tucson this season.