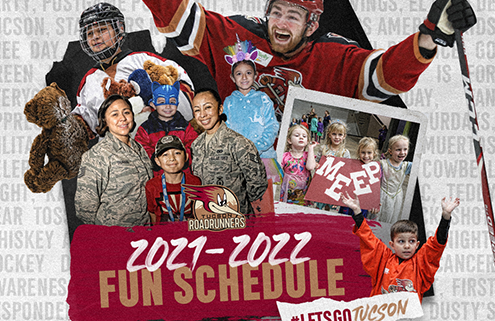 Tucson, Arizona – The Tucson Roadrunners, owned and operated by the Arizona Coyotes, have released their Fun Schedule for the 2021-2022 regular season at Tucson Arena.

The complete Fun Schedule can be found at TucsonRoadrunners.com/Fun where tickets can also be purchased.

Opening Weekend on Saturday, October 23 at 7 p.m. and Sunday, October 24 at 4 p.m., will show appreciation to some of the stars in our community with Health Care Hero Night followed by Teacher Appreciation Day.

Spiderman will be in attendance on Friday, December 10 for Marvel Night at the TCC.  Saturday, December 11 is Teddy Bear Toss as fans are invited to bring stuffed animals to toss onto the ice after the Roadrunners first goal to be given to local children in need over the holidays.

Friday, December 31, the team will celebrate five years in Tucson with a New Year’s Eve Party and the team’s 5th Anniversary Jersey.

Heading into 2022, a Post-Game Puck Shot on the ice will be held for fans in attendance following a 2 p.m. matinee against San Diego. Saturday, January 8 will be Whiskey and Wings featuring local restaurants and food trucks. On Sunday, January 9 the team will host a pregame mixer with Olympic Athletes prior to the games commencing in February.

St Patrick’s Day Beads will start the fun for Go Green Night on Wednesday, March 16. The team will honor First Responders on Friday, March 18 with Hockey is for Everyone and Dusty’s Birthday on Saturday, March 19.

Fan Appreciation Weekend is Friday, April 15 and Saturday, April 16 with a Team Poster Giveaway for the regular season home finale.