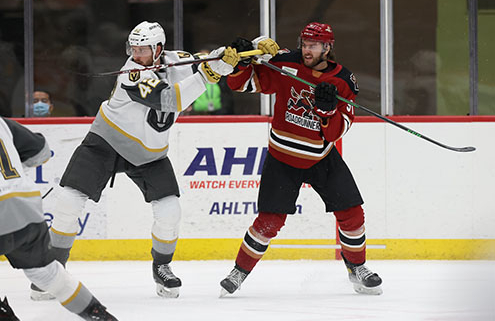 Tucson, Arizona – The Tucson Roadrunners have announced the Training Camp Schedule for the 2022-2023 season, which begins Monday, October 3 at 11 a.m. at the Tucson Arena.

Henderson will be the sole preseason opponent for Tucson for the second-straight year, after the Roadrunners and Silver Knights met for three exhibition contests ahead of the 2021-2022 regular season. The first matchup of the three-game slate took place at the Tucson Arena on October 6, 2021, while games two and three October 10 and 11 were at the Orleans Arena in Las Vegas. The Roadrunners won two of the three games, with then-rookie forward Matias Maccelli leading the team with three points in the preseason (1g 2a).

Tickets for Friday’s game at the Tucson Arena can be found HERE. All training camp practices are closed to the public.

Last Thursday, the Arizona Coyotes assigned five players to Tucson’s Training Camp from last season’s roster, including standout rookie from Arizona State University Colin Theisen. Goaltender Ivan Prosvetov was assigned by the Coyotes Saturday Saturday. The team will announce the complete roster at the start of Training Camp on Monday.