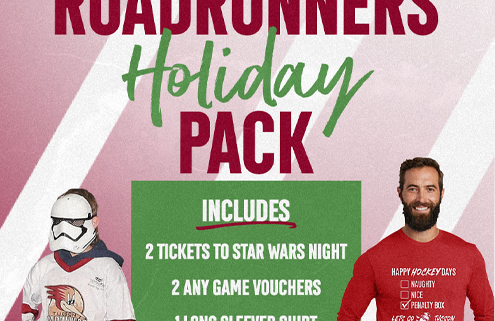 Tucson, Arizona – The Tucson Roadrunners today announced details for this season’s Holiday Packs which are available now at TucsonRoadrunners.com/Holidays.

The stocking stuffer includes two tickets for Star Wars Night on Saturday, January 28; two ticket vouchers to redeem for any game and a Roadrunners long sleeved t-shirt for $125, a savings of $58.

In addition, starting Monday and continuing during the month of December, the team will be offering several Flash Sales of can’t miss out holiday gift ideas to take advantage of as Tucsonans and Southern Arizona complete their holiday shopping. The Flash Sales can also be located at TucsonRoadrunners.com/Holidays.

-The Roadrunners will be collecting toys that Mascot Dusty will be delivering to Banner Health’s Diamond Children’s Medical Center on Monday, December 12.

-Postgame Showing of the “Elf” for all fans to enjoy on the video board after the game.

-The Roadrunners have partnered with the Assistance League of Tucson for this game. They will receive the proceeds from the 50/50 raffle that evening and will distribute a limited number of specially designed Teddy Bears for fans to use during the toss, visit their table during the game for more information.

-Next televised game on CW Tucson.

-Festivus Night with the final holiday party before Christmas and the final Roadrunners home game of 2022.

The team and its players are also making several other stops during the holidays to spread cheer and thank our community for a great 2022. Details can be found HERE.