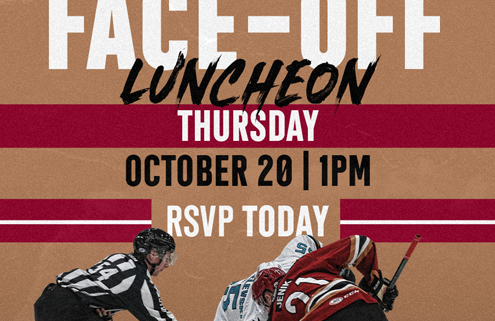 Tucson, Arizona – The Tucson Roadrunners, AHL affiliate of the Arizona Coyotes, will host their annual Face-Off Luncheon at Tucson Arena Thursday, October 20 at 1 p.m. ahead of their regular season home opening weekend Saturday, October 22 at 7 p.m. and Sunday, October 23 at 4 p.m. when they host the Bakersfield Condors.

The opportunity to have lunch with the entire Roadrunners team and hear from General Manager John Ferguson, Team President Bob Hoffman and Head Coach Steve Potvin is $45 for Roadrunners Season Ticket Members, $50 for the General Public and $500 for a table of 10 which also includes a Roadrunners jersey.

The Season Preview Program for the 2022-2023 season will also include several videos and more details for upcoming elements for the season along with a Q and A with Potvin and Ferguson.

Fans will also have the opportunity to win signed raffle items and other prizes to support the team’s community efforts in Southern Arizona.

Media availability with all participants will follow the program.

Roadrunners Training Camp is ongoing this week at Tucson Arena before the team hosts Henderson in preseason action Friday at 7 p.m. Tickets for all Roadrunners games are available at TucsonRoadrunners.com/Fun.