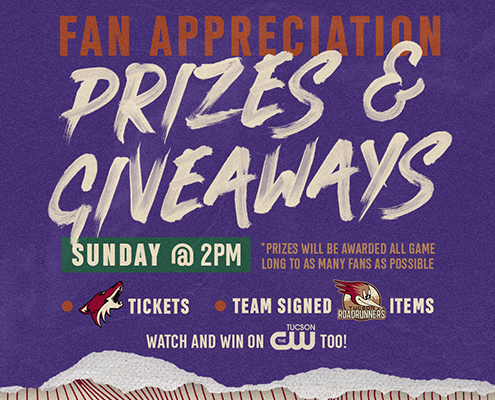 Tucson, Arizona – The Tucson Roadrunners, owned and operated by the Arizona Coyotes, will celebrate Fan Appreciation Weekend with two festive games at Tucson Arena Friday at 7 p.m. and Sunday at 2 p.m. when they take on the Ontario Reign.

A limited number of tickets are available for both games at TucsonRoadrunnners.com/WelcomeBack.

Friday the team will become El Lazo de Tucson for the third and final game in their Southern Arizona identity before the specialty jerseys will be auctioned off live off after the contest with all proceeds going to Boys and Girls Clubs of Tucson. Once again Mariachi Los Diablitos de Sunnyside will be at the arena to perform the Star-Spangled Banner and provide other entertainment throughout the night.

Sunday all fans will receive a Roadrunners Fifth Anniversary Team Poster. The game will also be televised on CW Tucson.

Sunday’s contest will feature prizes and giveaways featuring the below partners and items for both lucky fans in the arena and those watching on TV at home.

After the regular season home finales, the team will defend their 2019-2020 Pacific Division Championship as they head to California to open the playoffs on Tuesday. Time and opponent are TBD.