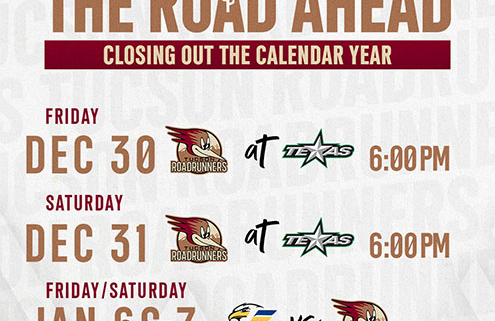 Tucson Roadrunners Road Ahead: Closing Out The Calendar Year

The 14-10-4-0 Roadrunners head to Texas for the final two games of the 2022 calendar year Friday and Saturday against the Texas Stars. The series is the first meeting of the season between Tucson and Texas, with a total of four games scheduled against the Roadrunners and the AHL affiliate of the Dallas Stars this year. Tucson earned a standings point in two of four matchups with Texas last season, finishing with a 1-2-1-0 head-to-head record. The Stars are currently atop the AHL’s Central Division at 17-7-3-2 and lead the league in goals scored with 109.

See You Next Year

Following Tucson’s series with the Texas Stars to close out 2022, the Roadrunners will return home for a two-game set against the Colorado Eagles Friday, January 6 and Saturday, January 7. The weekend series kicks off a four-game home stand at the Tucson Arena, and an overall ten home games for the Roadrunners in January. The series opener with the AHL affiliate of the Colorado Avalanche is Tucson’s first Health and Wellness night, with a Yoga On Ice Event with Yoga Loft Tucson available for fans. The first Kachina Saturday of 2023 and the series finale with Colorado will be preceded by the fan-favorite Whiskey and Wings pregame event. For more information and to purchase tickets, visit TucsonRoadrunners.com/Fun.

Atop The American Hockey League

Roadrunners forward Mike Carcone was recalled to the Coyotes Tuesday morning and scored in his season debut; after entering the Holiday Break firmly in first place in the American Hockey League in total scoring with 16 goals, 26 assists and 42 total points. His 1.56 points per-game was the highest among AHL players with more than two games played this year, and the 26-year-old has already set career highs in assists and total points. Carcone became the first player in Roadrunners history to lead the team in goals in back-to-back seasons with a franchise-record 24 goals last season and is currently 25 points away from Tucson’s single-season points record of 67. He appeared in 21 games last year with the Coyotes after making his NHL debut on December 28, 2021 and had four goals and two assists.

For The Rest Of Us

The Roadrunners split a two-game series with the San Diego Gulls December 22 and 23 at the Tucson Arena for their final two contests before the Christmas Break. Tucson tallied four power-play goals in the series, each scored by a different player (Milos Kelemen, Mike Carcone, J.S. Dea, Laurent Dauphin). In addition, three different Roadrunners players scored their first goal of the season in Thursday’s 6-2 win over the Gulls: Victor Soderstrom, Devante Stephens and Curtis Douglas. Boko Imama dropped the gloves for the second time this season on Thursday, while Devante Stephens recorded his second fight of the year on Friday. Friday also represented Tucson’s first Festivus Night, celebrating the holiday from Seinfeld and the episode “The Strike.”

Tucson’s power-play unit has produced 15 goals over the last eight games, including at least one in all eight home games during that span. Their 30 total goals while on the man-advantage this season is the second-most in the AHL’s Pacific Division, while their 25.6 power-play percentage on their home ice is also the second-highest mark in the Division. The Roadrunners have had nine different skaters light the lamp on the man-advantage, while forward Mike Carcone leads the American Hockey League with 10 power-play goals. With 14 power-play assists, Carcone is just behind teammate Cam Dineen, who is tied for the league lead with 15.

Hockey In Our House Ahead

The two-game series with Texas beginning on Friday marks the start of a stretch of 16 games in 33 days for the Tucson Roadrunners. Tucson’s 14 total games and 10 home contests in the month of January both represent season highs for a single month. The Roadrunners will welcome the Colorado Eagles and Milwaukee Admirals into town for a four-game home stand beginning January 6, followed by a six-game slate on their home ice against the Bakersfield Condors, Chicago Wolves and Abbotsford Canucks starting on January 20. The ten games will be split by a three-game road trip across Bakersfield, Coachella Valley and Henderson. January will end with another matchup against the Condors in Bakersfield on January 31, which marks the start of Tucson’s seven-game Gem Show Road Trip.

The Roadrunners have a number of individual streaks entering Friday’s series opener with the Texas Stars, highlighted by Mike Carcone and Cam Dineen being on active point streaks of five games dating back to Saturday, December 17 in San Diego. A point in both contests against the Stars would tie them with the Roadrunners season-high streak of seven consecutive games with a point, which was achieved by Carcone from November 23 to December 13. In addition, forward Curtis Douglas has lit the lamp in back-to-back outings with an even or better rating in each of his last eight appearances.

Each of Tucson’s next three series will be against opponents they are facing for the first time this season. The Roadrunners take on the AHL’s Central Division in the form of the Texas Stars (December 30 and 31) and Milwaukee Admirals (January 10 and 11), separated only by the first two matchups of the year with the Colorado Eagles on January 6 and 7. Tucson will also close out a six-game home stand near the end of January with a pair of games apiece against the Chicago Wolves and Abbotsford Canucks, who they have not faced this year. The Roadrunners have not met with the defending Calder Cup Champion Wolves since 2020 and have never taken the ice against the Milwaukee Admirals.

1-On-1 With Steve Potvin
Scroll to top