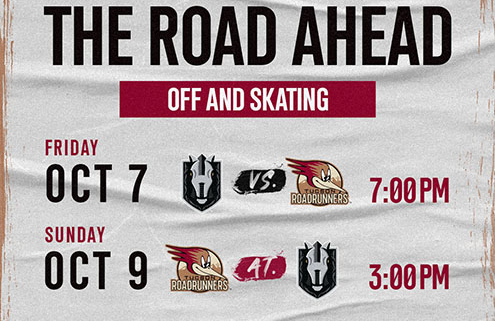 Tucson Roadrunners Road Ahead: Off And Skating

The Roadrunners will play a pair of preseason contests before the start of the regular season on Friday, October 14. Both games will be against the AHL affiliate of the Vegas Golden Knights, the Henderson Silver Knights. The first game will be Friday, October 7 at 7 p.m. in Tucson, while Sunday’s matinee matchup will take place at 3 p.m. in Henderson, Nevada. The Silver Knights will be Tucson’s lone preseason opponent for the second-straight year, after the Roadrunners finished 2-1 in three exhibition meetings with Henderson prior to last season. For tickets to Friday’s preseason kickoff, click HERE.

Where To Listen Live

Friday’s preseason opener at the Tucson Arena will be broadcast live in Southern Arizona on FOX Sports 1450AM, as well as on the iHeartRadio app. The audio of Sunday’s preseason finale will be streamed exclusively on TucsonRoadrunners.com and the team’s Facebook, YouTube, and Twitter platforms. “Voice of the Roadrunners” Adrian will have the action from both contests, with Roadrunners Warm-Up hosted by Jimmy Peebles leading up to the opening face-offs.

Monday marked the start of Roadrunners Training Camp at the Tucson Arena, leading into the pair of weekend preseason contests. The Roadrunners have released their Training Camp Roster, with 11 players returning from last season’s roster. On the blue line are reliable defensemen Cam Crotty and Victor Soderstrom, each entering their third seasons in the desert. Forwards Ryan McGregor, Hudson Elynuik and Liam Kirk are returning to the ice after missing significant time last season due to injury. 2021-2022 backstops Ivan Prosvetov and David Tendeck are joined by former Roadrunner Tyler Parks, who recorded his first career AHL start and victory with Tucson during the 2019-2020 season. Forward Colin Theisen, a late addition to last year’s roster after a record-setting season at Arizona State University is back for his first full professional season.

New Faces In The Fold

Joining the returning Roadrunners at Training Camp are a number of offseason signings and young prospects. Veteran forwards Adam Cracknell and Jean-Sebastien Dea arrive as a boost to the young core, while defenseman Devante Stephens comes to the desert after setting career highs in games played (59) and points (15) with the Abbotsford Canucks last year. Cracknell has 998 professional games under his belt, and “JSD” led the Laval Rocket in goals last season with 26. Forward Nathan Smith is in the Old Pueblo after making his NHL debut with Arizona last season. Czech Olympic Team and KHL teammates Ronald Knot and Lukas Klok are both on the Roadrunners blue line after appearing in the Arizona Coyotes preseason game in Tucson on September 25.

With a new ECHL affiliate in the Atlanta Gladiators, the Roadrunners have several new faces from the East Coast in Training Camp on Professional Tryouts (PTOs). Forward Gabe Guertler led the Gladiators in games played last season with 69, and Tim Davison finished tied for most points by a defenseman in 2021-2022 with 40. Davison was also tied for the overall team lead in assists with 33.

Ahead of the preseason action this weekend, a Training Camp Preview edition of the Roadrunners Insider Podcast was released on the iHeartRadio app. “Voice of the Roadrunners” Adrian Denny and TucsonRoadrunners.com’s Jimmy Peebles hear from several returning Roadrunners and detail their time at “Day Zero” of Tucson’s Training Camp. Returning to FOX Sports 1450AM and the iHeartRadio app ahead of the 2022-2023 season is Roadrunners Happy Hour, airing every Tuesday at 5 p.m. This week will see Adrian Denny, the Arizona Daily Star’s Brett Fera, and new co-host Kim Cota-Robles be joined by Roadrunners General Manager John Ferguson. If that’s not enough, daily Roadrunners Reports report to Tucson iHeartRadio stations with news and notes on the team.

The Roadrunners taking the ice on Friday at the Tucson Arena will be the second preseason game in the Old Pueblo this season, after the Arizona Coyotes took on the Anaheim Ducks at the Tucson Arena back on September 25. The contest featured several Roadrunners from last year, including Ben McCartney and Mike Carcone, who both made their National Hockey League debuts with Arizona last season. The game marked the second exhibition contest in Tucson’s history, coming exactly five years after another Ducks-Coyotes matchup at the Tucson Arena in 2017. Arizona fell to Anaheim in regulation by a score of 3-2 but won the postgame shootout to even the final tally at 3-3. A crowd of 4,780 filed into the Tucson Arena to watch the game after a pregame Fiesta hosted by the Roadrunners as part of their Hispanic Heritage Month Celebration.

Back At The Helm

The 2022-2023 season will mark the return of Steve Potvin as Head Coach of the Tucson Roadrunners. Potvin enters his sixth season behind the Tucson bench, and second year as Head Coach. Joining him is day one Roadrunners Assistant Coach John Slaney and new Assistant Coach Zack Stortini, both with several years of NHL playing experience. The three will combine to reinforce the Roadrunners culture that has brought the team two divisional titles in their first six seasons and has seen 46 players make their way up to the NHL with the Arizona Coyotes.