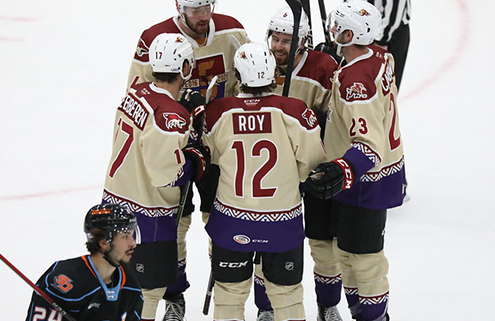 Who’s on the Schedule
The Tucson Roadrunners will conclude their season series with the Henderson Silver Knights this week, when they’ll meet for three games in four nights beginning Thursday, April 15, at the Orleans Arena in Las Vegas. Henderson took two out of the three games between these teams at the beginning of the month in Tucson, but the Roadrunners won their most recent matchup by a score of 4-2. In that game, Roadrunners forward Tyler Steenbergen was named the first star of the game after he scored two goals, including the game-winner on April 3. The Silver Knights are currently 18-6, leading the AHL Pacific Division.

Carcone Catches The League’s Attention
Tucson Roadrunners forward Michael Carcone put up some impressive numbers this weekend, earning himself AHL Player of the Week honors. Carcone recorded the first four-goal in Tucson Roadrunners history, and the first in the AHL in nearly two years. Carcone added to his stellar weekend with a pair of goals the following night, becoming the second Tucson player to reach ten goals on the season, along with Kevin Roy.

Michaels Making Noise
With Michael Carcone winning the AHL Player of the Week Award, the Tucson Roadrunners become the first team in the AHL this season to have multiple recipients of the award. Coincidentally, the other winner from the Roadrunners was forward Michael Bunting, who is currently up with the Arizona Coyotes. In 39 combined games this season, Bunting and Carcone have combined for 17 goals and 14 assists.

Roy Lends A Hand
While Mike Carcone racked up the goals against the Gulls this weekend, his linemate Kevin Roy was there every step of the way. Roy recorded an assist on all six of Carcone’s scores and added an additional assist Friday night on defenseman Kyle Capobianco’s slap-shot goal. Roy’s five-point performance is the most by a Roadrunner since Conor Garland matched the feat on October 26, 2018, when he recorded two goals and three assists in an 8-5 win over the Ontario Reign. Roy is tied for third in the AHL in points and leads the team in assists with 16.

Did You Know?
Longtime Tucson Roadrunner Michael Bunting, currently in the NHL with the Arizona Coyotes, has appeared in thirteen straight games on the road to start his NHL career, an all-time record. In his eight games this season, Bunting has six goals, including his first career hat trick, in a 5-2 victory over the Los Angeles Kings. Bunting is quickly making an impact with the Coyotes, as they make a push for the fourth and final playoff spot in the West Division.

Around the Pacific Division
While the Roadrunners and Silver Knights are battling in Las Vegas, the rest of the Pacific Division will be active this week. The San Jose Barracuda will be playing four games in five days with the Texas Stars. Meanwhile, the Bakersfield Condors will have a pair of contests with the Colorado Eagles on the road, before continuing their road trip with the Ontario Reign and Henderson Silver Knights. The San Diego Gulls will be running the gauntlet of fellow California teams, facing Ontario, Bakersfield and San Jose all on the road.