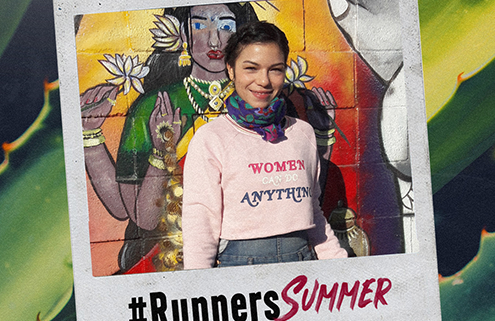 Tucson, Arizona – The Tucson Roadrunners, owned and operated by the Arizona Coyotes, are proud to introduce local artist Alejandra Trujillo who has been selected to paint a Roadrunners inspired mural at the Boys & Girls Clubs of Tucson on 3155 East Grant Road.

In coordination with the Southern Arizona Arts & Cultural Alliance (SAACA), the Roadrunners were introduced to Trujillo who has completed dozens of murals in Southern Arizona. Tucson is home to hundreds of gorgeous murals that can seen all throughout town displaying the area’s culture, desert and colorful beauty.

“It is our pleasure to welcome Alejandra aboard to create what will be a beautiful site for everyone driving down Grant Road in Tucson with another great mural for our city,” said Roadrunners President Bob Hoffman. “She is very talented and personifies Southern Arizona. Her plan for the mural will excite everyone involved and continue to show how great hockey in the desert really is.”

As part of a larger beautification project for the Boys & Girls Clubs campus with several community partners, the mural will be painted on a storage container next to the William J Dawson DEK Hockey Rink at the club that was unveiled by the Roadrunners in 2018.

The project will be completed in the next several weeks and will also include the assistance of local students: including members of the Boys & Girls Clubs.

Alejandra Trujillo was born in Nogales, Sonora, Mexico and raised in Nogales, Arizona. She makes her home in Tucson with her husband and three children. She draws inspiration for her art from her past, her present, and what she wants for our future. She is so grateful for the love and appreciation she receives from those who come upon her art and the patrons who support her. She feels that Tucson is the perfect community to nurture her artistic soul.

The Southern Arizona Arts & Cultural Alliance (SAACA) is a nonprofit organization dedicated to the creation, preservation and advancement of the Arts. SAACA strengthens the bonds between people, place and purpose through collaborative, arts-driven experiences. To date, SAACA has created over 300,000 arts-driven experiences, from innovative community festivals and cultural celebrations to creative sector development, and accessible arts enrichment programs.

1-On-1 With Defenseman Ty Emberson
Scroll to top