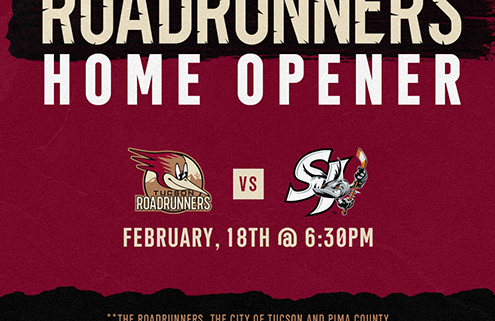 TUCSON, ARIZONA – The Tucson Roadrunners, owned and operated by the Arizona Coyotes, have announced that their regular season home opener at the Tucson Arena will be held on Thursday, February 18 at 6:30 p.m. against the San Jose Barracuda.

The complete AHL schedule is slated to be released Friday at 10 a.m.

The Roadrunners and Tucson Arena is in ongoing communication with Pima County and the City of Tucson regarding fan attendance as it pertains to health and safety for home games for the upcoming season. Those details will be shared in advance of games throughout the season.

Wednesday, the Roadrunners announced a four-game preseason schedule that will begin Sunday and Monday at the Toyota Sports Performance Center in El Segundo, California.

*The preseason home games against San Jose will be broadcast live on the radio in Tucson on Fox Sports 1450 AM and on the iHeart Radio app.