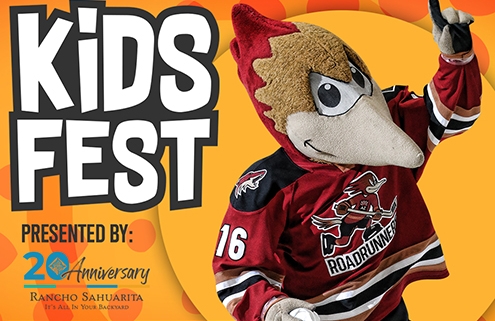 Dusty appeared both days at KidsFest on Saturday, July 17 and Sunday, July 18 at the Tucson Convention Center. It was also the first chance fans got to sign up for the Roadrunners Kids Club for the 2021-2022 season.

Tucson KidsFest offered activities for kids of all ages. There was a head-to-head Ninja Nation course where children could race against friends or family, Slime Zone, 25+ Retro 80’s Video Games, a Jurassic Encounter where guests came face-to-face with a baby T-Rex or Velociraptor and kids could participate in a fossil digging challenge. Also back this year, NEW carnival rides, the Slime Zone, Deb’s Dragons with the Creature Zone, and a Face Your Fears on-stage show.