Just like last Saturday the Roadrunners took a disappointing Friday evening result and bounced back in big fashion, tonight taking a thrilling 2-1 overtime victory from the Ontario Reign.

Coming out full of energy, Michael Bunting drew a penalty just 4:28 in and the Roadrunners power play went to work immediately.  After going around the horn following the faceoff win, Hudson Fasching jammed home a rebound following a Beau Bennett shot to give Tucson an early 1-0 lead.

Tucson took nine of the game’s first ten shots on the night but less than four minutes after the opening goal, the home side countered.  A defensive lapse by the Roadrunners in their own end allowed All-Star forward Martin Frk to cash in for Ontario, knotting the game at 1-1.

Following the two goals in the first 8:09 of action, first-year goaltenders Ivan Prosvetov and Matthew Villalta took center stage, rattling off 20+ consecutive stops each over the next 52 minutes, forcing an eventual overtime.

In the extra frame it was All-Star Brayden Burke, just over 24 hours after being named to the mid-season classic roster, winning it for Tucson.  Defenseman Robbie Russo denied a bid by Ontario captain Brett Sutter, jarring the puck away and allowing Andy Miele to go the length of the ice two-on-one with Burke.  Miele distributed the puck over to Burke at the red line and after a display of patience, Burke shot low past the blocker of Villalta to take the win for Tucson.

When all was said and done, Ivan Prosvetov stopped 27 of 28, winning his first appearance in game action since January 4.

“It was a good character win.  We were obviously missing two of our top forwards [Lane Pederson and Michael Chaput], Kyle Capobianco, so we’re a little short, but we found a way to get the job done.  That’s what it comes down to.”

Another testament to the team’s ability to bounce back after a performance they weren’t happy with Friday.

To further, tonight’s contest was so vastly different from their previous five meetings, much more in the favor of Ontario’s game than it was theirs and yet Tucson still found a way to pick up two crucial Pacific Division points, winning their 27thgame in 37 tries.

It all starts with the lockdown defense from Robbie Russo and the rest is history.

Kudos to the steady defenseman for taking his man and the forwards for turning it into a positive.

Left, right, low, high, Ivan had it when he had a chance tonight.

Some goalies are rusty after not playing for two weeks, but not our outstanding 20-year-old Russian rookie. 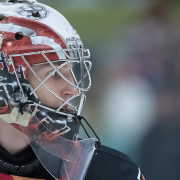