THREE OUT OF FOUR AIN’T BAD

The Roadrunners wrapped up the November portion of their schedule, as well as a two-game California trip, Saturday night in San Diego, falling to the Gulls 6-2 at Pechanga Arena.

A few first period mistakes in their own end proved to be costly as Tucson allowed three goals to the opponent within the first 20 minutes and dropped to a deficit they couldn’t return from.

While it was certainly an off night for Tucson in many areas, there were highlights for the first place club, including Lane Pederson’s team-leading 12thgoal of the season that came in the first period.  With Nick Merkley working from the glove-side circle, the third-year Roadrunner let go of a wrist shot that was deflected in front by Pederson.

The only other tally for the team tonight came 13:52 in the third, when Beau Bennett dropped a pass off for Brayden Burke, who would use a San Diego defenseman as a screener and snap one home from the slot.  The goal was Burke’s seventh of the season and all seven have come in power play fashion, which also reestablishes him tied for the league lead.

Albeit not to be hung on him entirely, Adin Hill suffered the loss, allowing the six goals on 30 shots.

Tucson now returns home for a Tuesday-Wednesday set against Colorado before departing for Iowa to begin their December.

“As long as these losses don’t become streaks, we’re going to be fine.  We’re back to work on Monday and we’re going to put our best foot forward against Colorado.”

“Off nights” such as this are going to happen.  Mistakes that we had not seen Roadrunners’ players make through the first 19 games of the season were made on Saturday, but if games such as that are only going to take place once every 20 games, the team can afford to be 45-15 when reaching the 60 game mark.

Players and coaches alike have made it known in the past that they don’t like many days to sit on a loss and fortunately for them, a travel day Sunday and practice day Monday are all that stand between them and another shot at getting back in the win column Tuesday night at Tucson Arena.

We know Lane Pederson posses a lethal release to his shot and can score from many different angels, so him further demonstrating his goal-scoring ability in the form of hand-eye coordination is worth another glance.

Clenching down on the mouth guard and all, Kyle Capobianco unleashes a drive from the point. 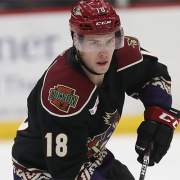